I might need to change my approach to these Summer Viewing posts. I'm only following three anime with any level of consistency:

By the time Friday comes around, the excitement from those three shows has worn off. I need a refresher on each episode. And I can't switch my posting day, because I already have my column at Beneath the Tangles every Monday.

I could try catching up on Ore Monogatari or watch Free! Eternal Summer. But the first airs mid-week, an inconvenient time to watch anything I want to think about. And the second is a chore. I hope to approach it with a more open mind this time, so I can complain less and appreciate more. But that takes brainwork, and my brain is busy.

For now, I'll just sort through my screenshots and try to remember what I was so excited about this past weekend...

There will be spoilers. Consider yourself warned.

At the end of ep 19 (59), Murasakibara said there was no way Seirin could win. I disagreed with him, of course. Sure, Kuroko was benched. But I still believe in him, Kagami, and the rest of the team. Now, in episode 20, Kuroko ends up back on the court. 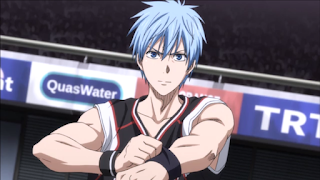 Meanwhile, the supposed Kuroko 2.0 (Mayuzumi?) loses his affectiveness and is downgraded to just another body on the court. Akashi still manages to use him, but at this point, it's extremely obvious that Akashi views him as a mere tool.

I have no screenshots from this one. I really, really like this show, but the visuals don't impress me. Still, even without screenshots' aid, I remember that Ei-chan played extremely well against his opponent. It's fun to watch him improve. He's methodical to a point that's unusual for a sports anime protagonist; usually guys like him are secondary characters, or at least share the spotlight with a more exuberant main character.

Daiya no Ace 2 (Ace of the Diamond)

Team Seido prevailed. Sawamura contributed. But best of all? The Coach showed his strength, and the guy who plans to replace him is getting nervous. If Coach leads this team to the championships and decides not to leave them at season's end, the replacement might not happen. A lot of people, both fictional and non-fictional, are hoping for that. The wannabe replacement, who's criticized Coach's team-oriented approach to high school baseball, begins to understand why we're still so loyal.

This post is a little later than I prefer, but oh well. I was enjoying my time with my family. In less than twelve hours, the next Kurobas will be up! I probably won't get a chance to watch it until tomorrow night, at the earliest. I have a full day planned. Summer vacation isn't as relaxing as it was in high school, so I can't watch much more anime than I do during the school year. I do, however, plan to follow another show when the summer season starts: Working!!! (that is, season three of Working!!). I can't wait. There weren't any fun comedies of my type this season, and I feel a bit deprived.
Posted by Annalyn at 12:14 AM