An Introvert's Guide to Boundaries and Friendship Behavior

I've mentioned this before, but friendship isn't exactly my area of expertise. For several of my teen years, I was pretty lonely. Not friendless, but lonely. My longtime close friends lived in another town, and I was convinced it was impossible for me to make new friends, or to deepen the friendships I had at school. It took several years and three semesters of dorm life to gain the relative confidence I have now.

Of course, I'll always be an introvert, and I'm still clumsy when it comes to friendship. So I guess it's no surprise that I liked The Kawai Complex Guide to Manors and Hostel Behavior, an anime about Usa, a normal guy, and his introverted senpai, Ritsu.

It's a rather affirming anime for me, as an introvert. It gives assurance, through the kind Usa-kun, that a friend (even, maybe, a potential love interest) could care enough to work with my need for quiet time. It also gives a lesson on how to draw boundaries and retain sanity after making friends. I've learned some of this through my own experience with the wonderful people I've met at college. So I know that, as ridiculous as Kawai Complex can be, it's not wrong about basic friendship things.

That's one reason that I like Kawai Complex so much. But there's one other thing: this anime portrays introversion extremely well. Each introvert is unique, because we're each a unique person. My needs and comforts are slightly different than Ritsu's. I don't always hate events with lots of people. But I'm still just as introverted as she is, and I feel like this show might advocate for introverts a bit.

[Before I write more, a disclaimer: there's a lot of sexual "humor" in Kawai Complex. In fact, there's so much of it, I'm surprised Hulu doesn't show it as TV-MA (seriously, though—Hetalia gets the mature rating, and Kawai Complex doesn't? That ain't right). I don't like any of the sexual humor, but I like Usa and Ritsu well enough, so I watched all 12 episodes.]

What's so great about how Kawai Complex portrays introversion and friendship?

First, they emphasize the difference between being alone and being lonely. Ritsu loves reading by herself, and she doesn't necessarily want to be interrupted, even if there are people having fun nearby. I can identify with that. Sometimes, at big events, I like to just sit to the side and observe, write, or read. And I'm content.

Of course, introverts can still get lonely, and we appreciate friendship. I think Kawai Complex shows that well. It includes the "what not to do" approach to friendship in the eleventh episode, when Rit-chan seems to make a new friend.

My fellow introverts, in the last two episodes of Kawai Complex, we learn a valuable lesson about boundaries. Boundaries can be hard, especially if you want people to like you, and especially if you finally have someone who's pursuing friendship with you. However, boundaries are necessary. Without them, we may go insane and lose our ability to be good friends to anyone.

For example, I dislike holding any significant conversations over text. It's cumbersome, even though I have a full keyboard, and I don't like feeling obligated to answer immediately. So, when I give my number to a friend who might be a texter, I say something like, "Just so you know, I'm not a big texter. I like texting about little things, since it's convenient and efficient, but it's not my favorite way to talk. I do better with chatting online or on the phone."

If I get sucked into a texting conversation anyway, I first consider my friend's feelings. I don't want to hurt them. Sometimes, I'll suggest that we move the conversation to chatting online. If I do stick to texting, I purposefully space out my replies, so they don't get used to my immediate response. I don't want them to get worried when I don't respond for over an hour.

And sometimes, whether it's by text, internet, phone, or even in person, I simply say, "Okay, I should really go now. I have things I need to get done (including recharge with alone time)."

There were times, especially when I lived in the dorms at school, when I didn't know how to set the boundaries I knew I desperately needed. There were girls in my hall who I really did like. They had tender hearts and a lot of conversation and emotion to share. But eventually, I ended up like this:

I called my parents one afternoon my freshman year, and I said something like this: "I love this girl, but I can't handle her coming by my room all the time! I don't want to cut her out completely, and maybe we can have lunch in the dining hall sometime, but I'm stressed out, and I need to be alone and at peace!"

Actually, I'm pretty sure I've called my parents with similar problems on multiple occasions, but that particular call to Dad sticks out to me. With his encouragement, I knew I needed to gently draw the line. The other girl was as understanding of my need to be alone as any extrovert can be. At the very least, she understood that too much interaction could trigger my anxiety.

For my part, I filled a couple pages of my journal with prayer, Bible verses, and problem-solving. I knew that, at times, I needed to give up my alone time for the sake of another person. My well-being was important, but it was neither more nor less important than my friend's. I asked God for help loving my friends and, at the same time, finding balance. When I drew a boundary between me and another person, I didn't want that boundary to leave them completely in the cold.

Exuberant, extroverted people occasionally struggle to understand our needs, and, sometimes, friendship with them doesn't go beyond surface-level interaction. In Kawai Complex, Ritsu started to make friends with a fellow book-lover… but the other girl was far more extroverted than she was, and was utterly exhausting to be with. She wasn't considerate of Ritsu's feelings, and she didn't take the effort to understand when Ritsu explained that she didn't like certain social events or too much emailing. Instead, this other girl dismissed Ritsu and went back to friends that were "on the same wavelength" and enjoyed nearly 24/7 interaction.

Later in the twelfth episode, Ritsu stated that she couldn't make any friends. In the screenshot below, her reasoning is shown in blue letters: "I don't think I'll ever find someone on my wavelength!" 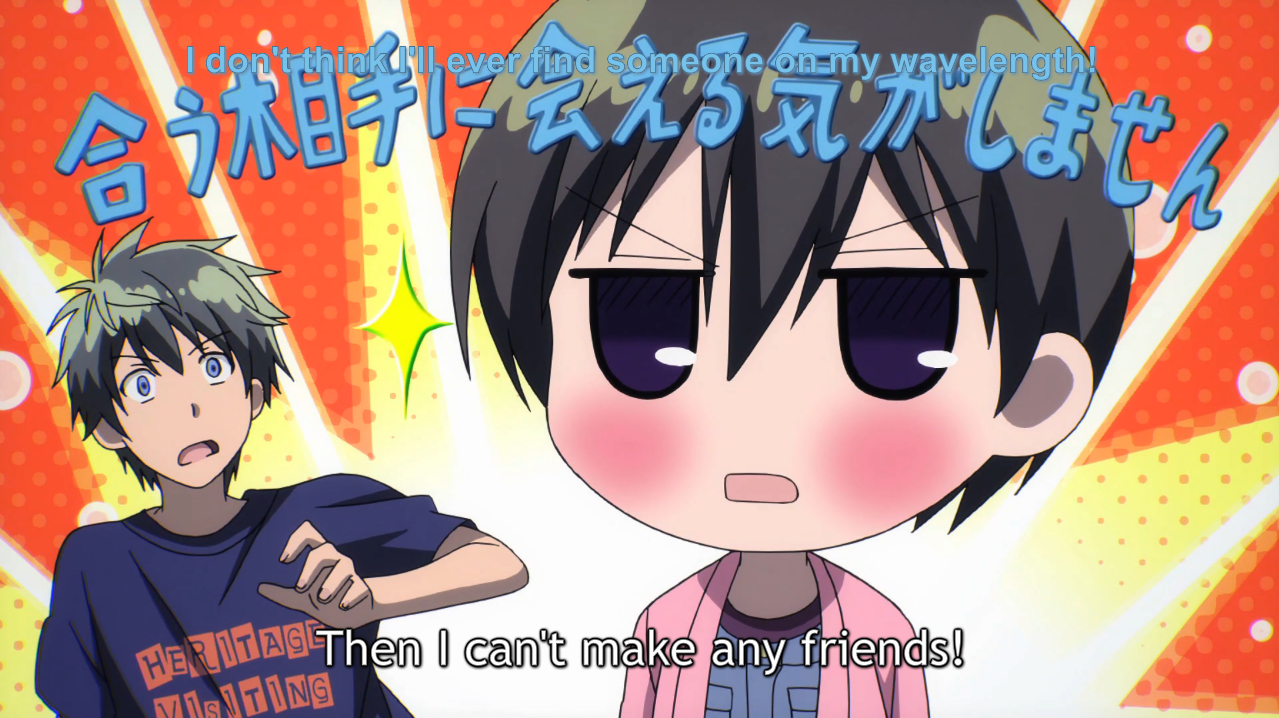 It does get discouraging. Ritsu isn't just a little bit introverted, and she's not just a casual reader. She seriously can't handle too many people, or too much time actively hanging out with anyone. And she seriously loves her books. How will she ever find someone who needs and likes the same things she does?

I've wondered the same things. I'm not just a little bit introverted. I need more than a few hours to recharge each day, and I often go weeks before I need to hang out with a friend. And I don't just kind of like anime… I really like it. Most of all, I like being an aniblogger. Writing and my time online (limited as it my have to be, when even social media becomes too social for me) are important to me. How will I ever find a friend who shares both my introversion and all of my hobbies, a friend who knows me both online and off?

The answer is that I probably won't, and Ritsu won't, either.

So, people are exhausting, and we'll never find anyone that's exactly like us. Thus, we can't make friends. Right?

No. That's an easy statement to say, with reasoning that we can hide behind, but it's just a coward's shield. Here are some other lines I've said:

"None of the other girls here need friendship like I do. They already have good friends, so they don't need me. I'd just take their time and energy unnecessarily, and they'd share their hearts with the friends they already have."

"We all graduate and go to different colleges in less than a year, anyway. That's not enough time to make a good, lasting friendship."

"I don't have the energy to make friends, and I don't know how to anyway. Putting myself out there anymore will just worsen my anxiety."

But it's not impossible. And if we don't try, it still hurts.

One of Ritsu's older housemates had a great response when she despaired of ever making friends. She told Ritsu that it doesn't matter if you match wavelengths. What matters is whether you can get along anyway.

And that's true. I had a great roommate last fall, the last semester before I moved out of the dorms. We were pretty different. She needed a fair amount of people time, while I couldn't get enough alone time. Our hobbies overlapped, but only barely—she still hasn't seen any of my anime. But she was sweet and considerate. And now, I consider her to be a dear friend. Sure, we didn't start out on the same wavelength. So we kind of made a new one between us. I enjoyed listening to what was important to her. And, after I moved out, she actually said she missed listening to me talk about anime.

Friends help each other grow. They learn to appreciate, and even enjoy, the things that are important to each other.

When someone shows any level of interest in what's important to me, I'm happy. If they start investing time and effort in me and in learning about my interests, I'm thrilled. That's why I love Usa-kun so much; he invests not only in an idealized version of Ritsu, but in learning about the real her. He doesn't ask about her books just because he wants to win her over or even, as he said, "to make her feel better. I'm genuinely interested. I want to learn to enjoy the things Senpai enjoys."

Of course, Usa is interested in Ritsu as more than just a friend. But he's starting out that way, and I expect their relationship will slowly develop, even if we don't get to see it on screen. Since their relationship is potentially more than friendship, I have even more interest. Because if a girl questions her ability to make friends, she's definitely going to question the idea of anyone pursuing her as more than a friend. But that's a bigger, more vulnerable topic. So I think I'd better end here.