A Soul too Big to Comprehend

After reading two positive reviews of Soul Eater, I decided to give the show a solid try. It took a few episodes for me to get into it, but once I did, I started to make connections between the show and real life. One connection involved Lord Death and God, as ironic as that sounds, and other involved the temptation to break rules. The first thirteen episodes of this wacky-looking show managed to evoke surprisingly deep thinking.

Still, if it hadn’t come so highly recommended, I probably wouldn’t have made it past the first few episodes. There were too many things to adjust to. For example: 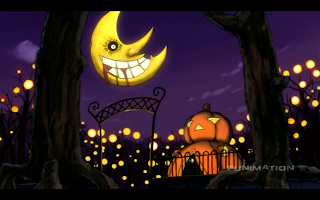 As usual, I’m drawing comparisons, especially now that I’ve detached Death from the evil connotations that come with his name. For example, in one episode, Maka tries to see Lord Death’s soul. She can see other peoples’ souls - round, transparent things. But she can’t see his, and she shrugs it off, thinking that perhaps he doesn’t have a soul. He’s a shinigami, after all, and not like humans.

Maka is wrong. The scene zooms out so we can see the school, the city it’s in, and Lord Death’s soul, which encompasses it all. In this show, such an impressive soul indicates impressive power. But I think, in this case, it has a double meaning. Lord Death cares deeply for his students - for everyone, really. He’s set up rules to protect humanity and oversees their wellbeing, even if they can’t always see it.

Maka can’t see Lord Death’s soul. It’s too big for her to comprehend. It reminds me a bit of God’s heart and soul, which is infinitely greater. Yes, I’m comparing God and Lord Death. It sounds weird, but roll with me, okay?

Sometimes, we’re so focused on the moments in our small lives, good and bad, that we miss the big picture. We see the good in the latest superhero movie, and the bad in the burglary down the street. We see the joy in the birth of new life, and the sadness in death. The things we experience are real and notable, but when we see only the moments, we miss the big picture. We don’t see God’s heart, and it’s easy to assume that perhaps He doesn’t have one, or that if He does, it doesn’t touch us. If we’re willing open our perspective to bigger possibilities, we might see that not only does God have a heart, but it’s big enough to hold us all. Each celebration and each heartbreak are cradled in a soul too immense for us to fathom... just as Maka couldn’t fathom Lord Death’s soul in that early episode.

Another comparison came up as I watched the thirteenth episode. Newly escaped immortal, “Free,” aka “The Man with the Demon Eye,” is fighting with Maka, Soul Eater, Black Star, and Tsubaki. He’s not on good terms with the witches (the enemy) or Lord Death. In fact, he seems to have a problem with rules in general, no matter how high of authority they come from. He says of Lord Death’s rules, in place to protect humanity, “Those arrogant rules. I don’t care if he’s a god or not. Where is your guarantee that you’re correct?”

Free’s wrong, of course, and we know that if our hero, Soul Eater, gives any credence to Free’s words or any similarly tempting jargon, he’ll end up in a heap of trouble. Lord Death’s rules were made for good, and it’s a bad idea to break them. Regardless of Free’s thinking, the guy with the biggest stick (in most stories, that’s a divine being) gets to decide what’s good, what’s evil, and what the rules are. In this case, it’s Lord Death. In the real world, it’s God. No matter what we think about His rules, He’s still God, and there’s not much we can do about it.

Personally, I’ve decided to accept that. I don’t always understand His rules, but I do have faith that His commands and guidelines are set out for my good and the good of those around me. If I have questions about what He’s done or commanded, I write them down. Sometimes, I end up returning to those questions within a few years to write the answer I’ve found. It’s much healthier than taking “Free”’s route and disregarding any rules I find unpleasant to follow. It might sound weird, but I feel more free placing myself under God’s authority than trying to escape it.

Ironically, Free named himself that after the witch Medusa broke him out of prison, but he’s actually being manipulated by her. She gives him a chance to fight back against The Man by fighting Lord Death’s students, and he leaps on it, unaware that he’s already entangled in her web. Just as, when we listen to Satan’s smooth talk, it can temporarily sound like the more freeing choice, but we eventually find we’re trapped in a web of darkness, and we don’t know how to get out.

Shortly before this episode, Soul began having a dream where a little demon tells him to break the rules in order to become stronger. As long as I’m making comparisons, I may as well bring up Genesis 3 and the Garden of Eden, where Satan told Eve to break the only rule God had given them: don’t eat the fruit on the Tree of the Knowledge of Good and Evil. Satan says, basically, “Eat it. It will make you stronger, and God doesn’t want that.” Okay, his lie, to quote the NIV translation, was closer to this: “God knows that when you eat from it your eyes will be opened, and you will be like God, knowing good and evil,” but knowledge is power, so same deal. Either way, it was a load of baloney sandwich, because figuring out that you’re naked and learning how to blame other people for your mistakes doesn’t exactly make you God. If I were reading Genesis 3 for the first time, I’d probably say the same thing I’m saying as I watch Soul Eater for the first time: “Don’t do it. Don’t break the rule. The rule is there for a reason, to protect you. You can get strong without breaking the rules. Please, please, please don’t listen to that demon! You’ll hurt yourself and all of humanity if you break this rule! Don’t fall into the bad guy’s trap!”

And, sure enough, Soul falls for it, just like Eve did in the Garden, and he gets a little more tangled in Medusa’s web. Much like Free did in his attempt to be his own man. Yup. This ain’t gonna turn out well. Thankfully, this is a shounen anime, so it’ll all be okay in the end, no matter how much pain comes before that. Unlike the reality, where... wait. Yeah, that turns out okay, too. There’s a lot of pain, epic battles, bloodbaths, and the whole world’s destroyed and remade, but in the end, it looks like things will be even better than they were before Eve made that dumb choice to eat from the wrong tree.

It comforting to know that, in the meanwhile, God is still here, and his heart is big enough to hold all our joy, all our pain, and every moment in between. Even if we our perspective isn’t always wide enough to see it.
Posted by Annalyn at 9:01 AM